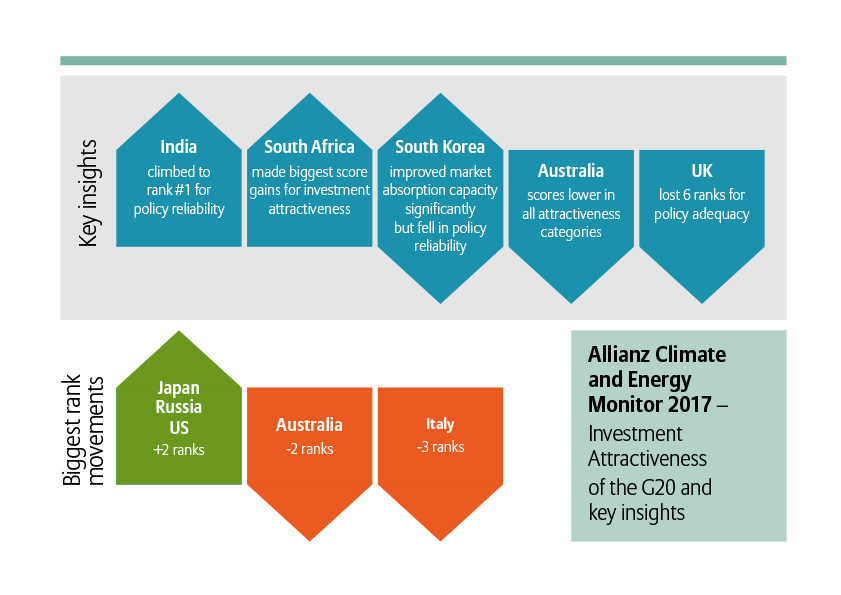 Johannesburg, July 6, 2017.  The Allianz Climate and Energy Monitor 2017 ranked South Africa 10th among G20 countries for renewable energy investment conditions. It scored high for its depth of capital markets, even though a high inflation forecast brought down the overall score. The country has steadily increased its renewables capacity in the last years and has a relatively high presence of leading renewable energy business.

The Allianz Climate and Energy Monitor 2017 examined the needs and investment climate for all G20 countries regarding renewable energy. Germany, UK and France maintain the top three positions in the 2017 edition. They combine a largely supportive policy environment for renewable energy with a mature market and adequate general investment environment.

China holds its place in this best-performers club, maintaining fourth position. With roaring renewable energy markets and a consistent policy push, China installed more solar photo-voltaic than the rest of the G20 combined in 2016. India, South Africa, Brazil and Indonesia emerge as high-need hotspots owing to increasing demand for energy, sheer size and vulnerability of the existing power system to a changing climate. “Emerging economies are increasingly taking on a leadership role and are credibly enhancing their renewable energy financing frameworks”, says Simone Ruiz-Vergote, Managing Director at Allianz Climate Solutions. “China, India and South Africa are keenly interested in improving their attractiveness for investors in renewable energy, and they clearly managed to do so in 2016. Their prospects are good if policy support and market capacities are maintained.”

South Africa has a national strategy to tackle climate change. However, the country needs to increase its ambition level and put together a plan to decarbonize the electricity sector. The current auctioning system available in the country is insufficient to create a level-playing field for renewables compared to the fossil-fuel electricity infrastructure.

Most G20 states improved conditions for investments in low-carbon energy over the past year, with several emerging market countries rapidly catching up to the leaders. The rapid development of the renewable energy sector is a crucial success factor for meeting the Paris climate goals. The G20 countries need to roughly double their annual investments in renewable energy to align their power infrastructure with the 2°C pathway, fixed at the Paris COP 21 in 2015.

Renewables are now attracting the bulk of new power investments of the G20 growing by approximately 25% annually over the last five years. Continuously falling technology costs have supported this strong increase. In some countries renewables passed a tipping point, reaching cost-competitiveness with conventional energy sources. “Even with falling prices, a supportive policy environment for future growth of renewables is needed to provide reliable legislation for investors”, says Jan Burck from Germanwatch, co-author of the report.

The absolute investing needs in the G20 stand at about USD 700 billion per year between 2014 and 2035. In 2015, the combined investments in all power generation, including fossil fuels, stood at USD 420 billion globally. After higher initial investments in renewable energy technologies like wind and photovoltaics, the low-carbon transition can be achieved at neutral cost in the mid-term. “With the first hurdle taken in cost competitiveness, governments now need to adjust their power systems and market design to cope with an increasing share of weather-dependent renewables”, adds Prof. Dr. Niklas Höhne, founding partner of the NewClimate Institute and co-author of the Monitor.

Insurance companies can make a considerable contribution here, as well-capitalized investors with a long-term investment horizon and necessary risk management expertise. Infrastructure investments are well suited for insurers’ long-term commitments to their life insurance clients. In 2016, as a leading investor in renewable energy, Allianz placed further capital in new debt and equity investments, bringing the total to EUR 4.6 billion, Allianz plans to further increase its green investments in mid-term. “Reliable and stable regulation enables access to larger pools of capital at lower cost. Hence, an integrated approach can help reduce the costs associated with the shift to a low-carbon economy,” confirms Axel Zehren, Chief Financial Officer at Allianz Investment Management.

About the Allianz Climate and Energy Monitor

The Allianz Climate and Energy Monitor 2017 ranks for the second time G20 member states according to their attractiveness as potential destinations for investments in low-carbon electricity infrastructure. It further considers their current and future investment needs in line with a trajectory compatible with the 2°C/1.5°C temperature limit of the Paris Agreement.

Whether and where investors provide funds depends on a reliable climate and energy strategy in the country concerned, as well as on specific, transparent support mechanisms, fair competition with fossil energy sources, the influence of contrary lobbies, and market experience with renewable energy. These are in addition to general factors like inflation, openness to foreign investors, and legal certainty.

Germanwatch is an independent development and environmental organization that advocates for global equity and preservation of livelihood. They concentrate on politics and economies of the “global north” and its worldwide impacts. Starting point of the work are disadvantaged people from the “global south” and together with their members, sponsors and other actors from the civil society to lobby for sustainable development. Based on scientific analyses they inform the public sector, make educational as well as lobby work and demonstrate consumers how to act according their goals.

The NewClimate Institute for Climate Policy and Global Sustainability is a Germany-based research institute generating ideas on climate change and driving their implementation. They do research, policy design and knowledge sharing on raising ambition for action against climate change and supporting sustainable development. Their core expertise lies in the areas of climate policy analysis, climate action tracking, climate finance, carbon markets,
and sustainable energy.

The Allianz Group is one of the world’s leading insurers and asset managers with more than 86 million retail and corporate customers. Allianz customers benefit from a broad range of personal and corporate insurance services, ranging from property, life and health insurance to assistance services to credit insurance and global business insurance. Allianz is one of the world’s largest investors, managing over 650 billion euros on behalf of its insurance customers while our asset managers Allianz Global Investors and PIMCO manage an additional 1.3 trillion euros of third-party assets. Thanks to our systematic integration of ecological and social criteria in our business processes and investment decisions, we hold a leading position in the Dow Jones Sustainability Index. In 2016, over 140,000 employees in more than 70 countries achieved total revenue of 122 billion euros and an operating profit of 11 billion euros for the group.

These assessments are, as always, subject to the disclaimer provided below.

Such deviations may arise due to, without limitation, (i) changes of the general economic conditions and competitive situation, particularly in the Allianz Group’s core business and core markets, (ii) performance of financial markets (particularly market volatility, liquidity and credit events), (iii) frequency and severity of insured loss events, including from natural catastrophes, and the development of loss expenses, (iv) mortality and morbidity levels and trends, (v) persistency levels, (vi) particularly in the banking business, the extent of credit defaults, (vii) interest rate levels, (viii) currency exchange rates including the euro/US-dollar exchange rate, (ix) changes in laws and regulations, including tax regulations, (x) the impact of acquisitions, including related integration issues, and reorganization measures, and (xi) general competitive factors, in each case on a local, regional, national and/or global basis. Many of these factors may be more likely to occur, or more pronounced, as a result of terrorist activities and their consequences.

No duty to update