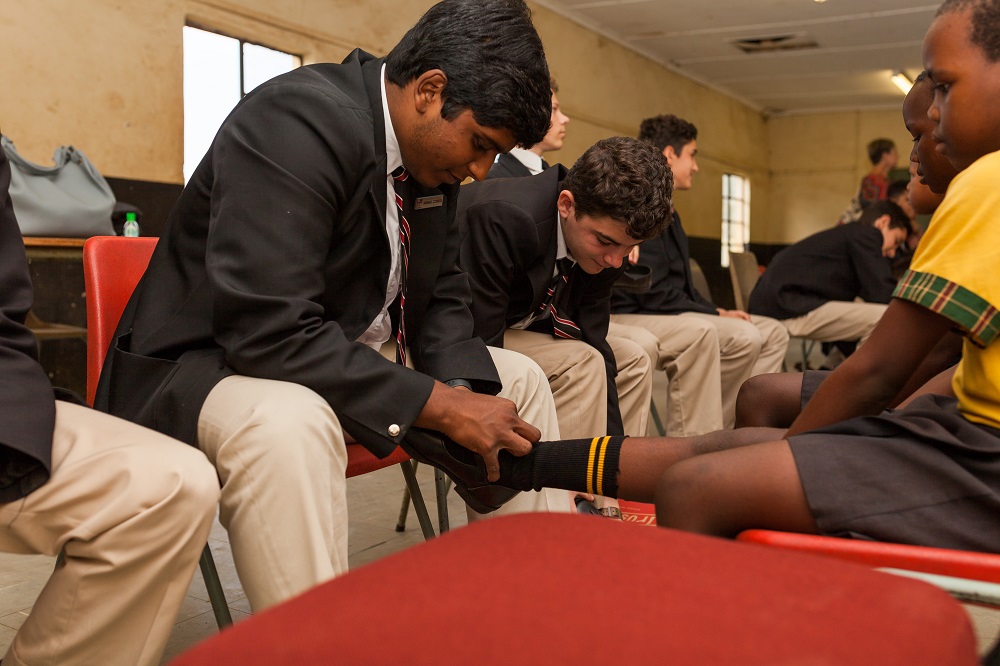 DURBAN: Nearly 3 000 children from poverty-stricken areas in KwaZulu-Natal can now walk with dignity and hope after receiving school shoes, socks and shoe polish to the value of more than R330 000 from the corporate and community initiative, Soul2Sole2019.

Aimed at making a significant change one school, one child and one pair of shoes at a time, Soul2Sole2019 is spearheaded by the Blue Sky Society Trust in partnership with The Lion Match Company and Aramex South Africa. The project saw 2881 pairs of new and gently-worn school shoes, socks and Lion Quality Shoe Polish distributed to little ones in the KZN Midlands and in the greater Durban area, many of whom had never owned a pair of school footwear before. The contributions serve as a helping hand for families too, most of whom rely on social grants to survive thereby making school shoes a luxury purchase.

“Soul2Sole is of great help to the school and the community,” says Mrs. Nomasonto Mntungwa, principal of Sanele Primary School in Ndwedwe that received 295 pairs of shoes from Soul2Sole. “Most of our learners are vulnerable, dependent on their grandparent’s grant. As we are approaching wintertime, it’s cold. Shoes will protect the children from cold winter days. As the road to school is gravel that makes it difficult to walk fast, the shoes will be of great help. This will give breath to many families as shoes are so expensive, some fail to buy. The most important thing is that the whole school is now in uniform.”

There were smiles all around as the children laced up and buckled their school shoes. “Thank you very much. Now I have school shoes I did not have. I am very happy!” said KwaSimamane Junior Primary Grade 4 pupil, Lindani Hlophe. The school’s principal, Mr. Nhlanhla Mosby Msomi, says Soul2Sole2019 has brought hope, relief and gratitude to the broader community. “Most of our learners did not have school shoes as winter is approaching. Soul2Sole came at the right time when most learners needed help. The mood was very good not only to me but to educators, learners and parents as well. I am even now getting words of appreciation from parents who are gratified by Soul2Soles’s sincere donation.”

Children in South Africa are among more than seven million learners in Africa who go to school either barefoot or without proper footwear, risking injury and infection. Milena Domiro, Group Corporate Affairs and Marketing Manager, The Lion Match Company says they got involved in the ongoing Soul2Sole project to help grow and empower the future leaders of our country. “No child should have to go to school without a pair of shoes on their feet. Seeing the joy in the faces of these children when they receive the socks, Lion Quality Shoe Polish and school shoes, is priceless.  Brand-new school shoes cost a lot of money and these families cannot afford them.  It warms my heart to know they will have one less thing to worry about.”

Aramex South Africa kindly sponsored transportation costs, assisting with the collection, storage and distribution of the shoes. “Being able to see the smile and feel the appreciation from the children for something as small as a pair of school shoes, is the biggest reward that makes the amount of effort invested that much more worth it,” says Dinesh Dheepnarain, Aramex South Africa Regional Operations Manager – East. “These children endure long walks in shoes that either have holes in them, worn out soles, or are just too tight. Therefore, any part that we could play in connecting the dots so that each child within this campaign receives a pair of shoes, is value that cannot be measured.”

Soul2Sole has tripled in size and reach since its inception in 2014. Project Manager, Anna Sacks, points out that they introduce new elements each year to grow the campaign. “This year, we asked each recipient school to give back to their local community in some shape or form. We want to help learners realise that kindness and generosity does not necessarily come in the form of money or donations. Just by reading at a local creche or assisting the community with collecting rubbish one day a week can change and uplift many lives.”

1: Learners from Clifton College lent a helping hand at KwaSimamane Primary School in Ndwedwe yesterday (27 May 2019) for Project Soul2Sole.

3 & 4: Learners from KwaSimamane Junior Primary School in Ndwedwe were overjoyed after the Soul2Sole team distributed new and gently-worn school shoes. For many of the little ones, these are the first pair of school shoes they have owned.

7: Abdullah Seedat took time out from classes at Orient Islamic School to gift Empilweni Primary learner, Luyando Ngcobo, with a new pair of school shoes as part of the Soul2Sole campaign.